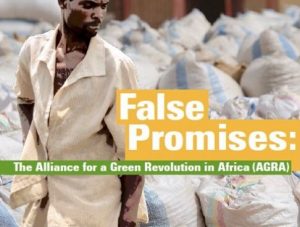 New study by a broad civil society alliance concludes: the agricultural alliance has failed to achieve its own goals.

An international study published by the Rosa-Luxemburg-Stiftung, Biba, Bread for the World, FIAN Germany, Forum on Environment and Development, INKOTA-netzwerk, IRPAD, PELUM Zambia, Tabio, and TOAM documents the dramatic negative impacts of the Alliance for a Green Revolution (AGRA) on small-scale food producers in the 13 African countries the initiative focuses on.

AGRA was founded in 2006 to give new impetus to the fight against hunger in Africa with a corporate-driven “Green Revolution” approach. It promised to double the agricultural yields and incomes of 30 million small-scale food producer households by 2020, thus halving both hunger and poverty in the focus countries. To achieve these goals, AGRA received over one billion US dollars –mainly from the Bill and Melinda Gates Foundation, but also from governments like the US, UK and Germany. The study issues AGRA a decidedly negative report card: yield increases for key staple crops in the years before AGRA were just as low as during AGRA. Instead of halving hunger, the situation in the 13 focus countries has worsened since AGRA was launched. The number of people going hungry has increased by 30 percent during the AGRA years.

The study also shows that AGRA in fact harms small-scale food producers, for example by subjecting them to high levels of debt. In Zambia and Tanzania, small-scale food producers were unable to repay the loans for fertilizer and hybrid seeds after the first harvest. AGRA projects also restrict the freedom of choice for small-scale food producers to decide for themselves what they want to grow. This has dramatic effects on crop diversity. AGRA’s focus is on the one-sided cultivation of maize. Traditional climate-resistant and nutrient-rich crops have thus declined. According to the study, millet production fell by 24 percent in the 13 AGRA focus countries from 2006 to 2018. Moreover, AGRA lobbies governments on behalf of agricultural corporations to pass legislation that will benefit fertilizer producers and seed companies instead of strengthening small-scale food production and alternative structures. Indeed, it is being courted by governments worldwide for precisely this service.

The publishers of the study conclude, among other things, that governments in the Global North and Global South must withdraw from AGRA and all other Green Revolution programmes. Instead, they should support more sustainable, holistic approaches such as agroecology. Agroecology focuses on the needs of small-scale food producers, their human right to food, and their food sovereignty.

The study “False Promises: The Alliance for a Green Revolution in Africa (AGRA)” was published by: Biba (Kenya), Bread for the World (Germany), FIAN Germany, Forum on Environment and Development (Germany), INKOTA-netzwerk (Germany), IRPAD (Mali), PELUM Zambia, Rosa Luxemburg Stiftung (Germany), Tabio (Tanzania) and TOAM (Tanzania). Much of the analysis of the agricultural data in this study is based on the work of the internationally renowned scientist Timothy A. Wise. 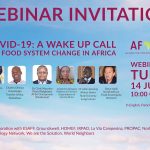 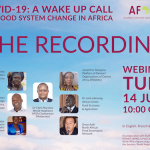