We, the Members of the Alliance for Food Sovereignty in Africa – a network of 36 civil society actors, representing smallholder farmers, pastoralists, hunter/gatherers, indigenous peoples, faith-based institutions, women and youth networks, consumer networks and environmentalists from across Africa, in our 3-day meeting on agroecology, seed sovereignty, food policies, and climate change;

Cognizant of the AU’s call to its Member States to “Act with a sense of urgency on climate change and the environment”, and to this end pursue “Sustainable exploitation and management of Africa’s diversity for the benefit of its people”, as enshrined in Agenda 2063: “The Africa We Want”;

Inspired by AU’s enduring pan-African Vision of “An integrated, prosperous and peaceful Africa, driven by its own citizens and representing a dynamic force in the international arena”;

Also Inspired by Agenda 2063’s principle of an “African approach to development and transformation” as a critical enabler to Africa’s Transformation;

Pursuant to our Shared Vision of a food sovereign Africa, realised through just and equitable ways of her people interacting in harmony with nature, harnessing and enhancing their traditional knowledge systems, controlling their territories, livelihoods and governance systems and related decision-making processes, and holding their governments and corporate powers to account for their legacy to the future generations;

Taking note of the confirmation by the Intergovernmental Panel on Climate Change (IPCC) that agroecology has the potential to feed the growing population and that smallholder farmers are a major contributor to the global food system;

Believing that African family farming/production systems based on agroecological and indigenous approaches are absolutely critical in sustaining food sovereignty and livelihoods of the largely rural and disadvantaged urban populations;

Gravely Perturbed by overt and covert acts by corporate industrialisation actors that have caused massive land grabs, destruction of biodiversity and ecosystems by way of greenhouse gas emissions and pollution; increasing dependence on fossil fuel, synthetic fertilisers and soil degrading agro-toxins; and displacing and destroying the livelihoods and cultures of indigenous peoples, especially pastoralists and hunter-gatherers;

Deeply Concerned with the inextricable connections between climate change, land degradation, deforestation, and industrial agriculture – a prime mechanism of agrarian extractivism and extractivist development – and how these drive social and political instability and food insecurity on the continent, which further aggravates the systemic, existential crises we face globally;

Aware that exploitative development interventions to date have and continue to reinforce indebtedness, inequalities and social exclusion, as well as deepen dependency on destructive, short-sighted and short-lived fossil fuel and capital intensive projects, and global agricultural and forest value chains, which all contribute to creating conditions for extreme vulnerability to shocks, including but not limited to the COVID-19 pandemic and its negative socio-economic ramifications;

Encouraged by a process of policy analysis and stakeholder consultations involving continental, regional and national level actors in food systems, agroecology and ecosystems, which started in late 2020, in which AFSA and the African Union Commission collaborated to gather evidence and establish buy-in and insights leading to the development of an Africa Food Policy Framework;

Mindful of the role played by traditional African diets in enhancing the resilience of some African communities during the COVID-19 pandemic and non-communicable diseases (NCDs), which have reached epidemic levels;

Worried about emerging research evidence that rapid and unplanned urbanisation, with the consequent shift in the labour force largely from food-producing to non-food producing jobs, and a rising African middle class, is affecting rural land use and changing our food systems;

Alarmed by the rapid erosion of African cultures that coincides with the loss of biodiversity, declining air and water quality, the degradation of our soils, which is becoming a major issue affecting the livelihoods of many, while the growing retail/supermarket sector is also destroying and displacing local food systems and local markets and traditional value chains; thus limiting access to local, diverse foods and healthy diets;

RESOLVE to make this Statement on the Position of African Civil Society Actors working to promote agroecology and seed systems and dutifully and respectfully: 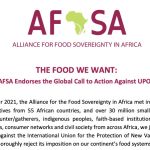 THE FOOD WE WANT: AFSA Endorses the Global Call to Action Against UPOVNews, Publications 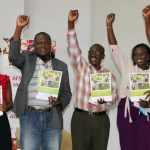