We the organizations and people representing peasants, small-scale farmers, women and youth, Indigenous Peoples, fishers, pastoralists fighting for food sovereignty, together with our allies, NGOs, faith-based organisations, human rights organizations and academics, wish to express our solidarity with the struggle of the Maasai communities living in Loliondo and in Ngorongoro Conservation Area in Tanzania. Around 160,000 Maasai Indigenous Peoples are currently affected by the unilateral decision of the Government of Tanzania to forcefully evict them out of their ancestral lands.

The Maasai Indigenous Peoples have preserved their environment and lived in coexistence with the wildlife in these areas for centuries. Now the Tanzanian Government is arguing that they are a threat to the environment, and that the only way to protect it is to remove the people from their ancestral lands. In our opinion, the Government is using a false narrative of conservation to promote elite tourism and commercial hunting. These activities actually have a highly detrimental impact on the environment. In Loliondo and Sale, people have been forcefully removed from an area of 1,500 km2, while in Ngorongoro, the government is currently grabbing 8,292 km2 of land. This is notably done through a “voluntary” relocation scheme which, according to the communities, is not voluntary as it was developed without any consultation and engagement.

We are very concerned about the recent decision of the government of Tanzania to halt social services in Ngorongoro including by putting pressure on the Catholic Church to cut down on emergency health services, maternity and childcare. This will severely affect the most vulnerable groups: pregnant women and mothers with their small children. In our opinion, these measures of the Tanzanian government are purposely designed to force people out of the Ngorongoro area, as life will become unbearable without essential services such as health care.

The current so-called voluntary relocation scheme and the halting of social services amounts to the forced displacement of Maasai Indigenous Peoples from their ancestral lands, and is threatening their lives, cultures, and the many benefits they have brought to their environment including conserving wildlife. We are further concerned that the Tanzanian government is planning on changing the laws that allow Maasai communities to reside in the Ngorongoro Conservation area thereby legalizing forced evictions. \

In Loliondo, the Tanzanian government has already grabbed village land for so-called conservation and demarcated it without the engagement of the communities. This is a violation of the country’s policies and land laws. The Tanzanian government has arrested Maasai community members and their leaders to silence them and stop any resistance. It has also seized livestock.

The Maasai, livestock and wildlife can co-exist. Solutions to this crisis can be found that build on Maasai traditional knowledge and practices. We are urging the Tanzanian government to halt forced evictions and start consultations with the Maasai in compliance with international human rights obligations and national laws that state that decisions that will have an impact on Maasai communities have to be made with their involvement, consultation, and free prior and informed consent.

Fellowship of Christian Councils and Churches in West Africa (FECCIWA)

Friends of the Earth Africa (FoEA)

This statement was drafted during an International Exchange on Women’s Rights to Communal Land gathering representatives from the Kenyan Peasants League (KPL, La Via Campesina), the National Coordination of Peasant organisation of Guinea (CNOP-G, ROPPA, La Via Campesina), the Convergence of Rural Women for Food Sovereignty in Mali (COFERSA), a Maasai delegation of 7 representatives from Ngorongoro and Loliondo in Tanzania, and academics from the Centre for Agroecology, Water and Resilience (CAWR, Coventry University, UK) and the Institute for Development Research (IDR, University of Natural Resources and Life Sciences, Vienna). 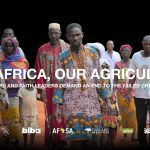 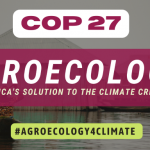