Today the Alliance for Food Sovereignty in Africa (AFSA), Africa’s largest civil society network, called on donors to stop funding the Alliance for a Green Revolution in Africa (AGRA) and other programs that promote industrialized agriculture on the continent. AFSA leaders will deliver their letter to AGRA donors, with hundreds of endorsements from international organizations, next week during AGRA’s annual Green Revolution Forum.

The African social movement leaders are challenging AGRA’s claim to speak for Africans on the global stage at a time when hunger on the continent has worsened so dramatically. The African Green Revolution Forum this year claims it will offer a “single coordinated African voice” in advance of the UN Food Systems Summit September 23.

“We are here to state clearly and categorically that the Alliance for a Green Revolution in Africa does not speak for Africans,” — said Anne Maina, director of the Biodiversity and Biosafety Association of Kenya and a member of AFSA.

The Alliance for Food Sovereignty in Africa (AFSA) represents more than 200 million farmers, fishers, pastoralists and indigenous peoples across Africa. The international call to cease AGRA funding comes after AFSA wrote to AGRA donors in June to request evidence of the program’s success. AFSA received few replies and no credible evidence.

“We welcome investment in agriculture on our continent,” wrote AFSA General Coordinator Million Belay in a recent co-authored article in Scientific American, “But we seek it in a form that is democratic and responsive to the people at the heart of agriculture, not as a top-down force that ends up concentrating power and profit into the hands of a small number of multinational companies.”

Multi-faith leaders wrote to the Bill & Melinda Gates Foundation a letter signed by nearly 500 community faith leaders to request a change in policies in Africa. They received no reply. They call on all donors to fund programs that “respect and support locally-defined, holistic approaches that enable agroecological transitions to sustainable food systems in Africa.”

“What African farmers need is support to find communal solutions that increase climate resilience, rather than top-down profit-driven industrial-scale farming systems,” says Francesca de Gasparis, Executive Director of the Southern African Faith Communities’ Environment Institute (SAFCEI), which initiated the letter to Gates. “When it comes to the climate, African faith communities are urging the world to think twice before pushing a technical and corporate farming approach.”

The controversy over AGRA and the Green Revolution has been building since the release last summer of the NGO report, “False Promises,” which documented how AGRA was “failing on its own terms.” At the press conference, U.S.-based researcher Timothy A. Wise detailed his research showing that Green Revolution programs have failed to generate the promised productivity revolution that would lift rural incomes and reduce hunger.

“After 15 years and one billion dollars in outside funding, AGRA has failed to catalyze a productivity revolution in African agriculture. Farmers’ yields have not grown significantly, poverty remains endemic, and the number of chronically hungry people in AGRA’s 13 focus countries increased 30%. It is time for donors to listen to African farmers and community leaders.”

Wise confirmed that neither AGRA nor any of its donors has produced evidence of the program’s effectiveness, despite repeated requests from researchers and African civil society organizations.

Small-scale farmer Petronella Simuchimba summed up the impact of AGRA’s industrial farming approach: “People are being bonded. They’re enslaved — to fertilizers, to herbicides, to pesticides — because they cannot thrive without these. Their soils are degraded; they cannot grow anything anymore without fertilizer. It’s a vicious cycle of dependence…”

African civil society leaders say that AGRA is doing more harm than good at a time when severe hunger on the continent has risen dramatically. In 2020, Sub-Saharan Africa saw as many as 44 million more people suffer severe undernourishment, leaving 30% of the continent’s residents struggling to feed their families. A stunning 66% of the continent faced “moderate or severe food insecurity” in 2020, according to FAO estimates, up from 51% in 2014. There has been a nearly 50% increase in severe hunger on the continent since AGRA promised in 2006 to halve food insecurity by 2020.

Mariann Bassey-Orovwuje of Friends of the Earth Africa summarized AFSA’s direct challenge to AGRA and its donors. AGRA does not speak for Africans. Donors should stop imposing their schemes for industrialized agriculture on African farmers and communities. As AFSA’s public letter to AGRA donors, signed by hundreds of organizations, states:

“It is urgent to change course and turn to a development model based on truly sustainable practices, equity, and justice. Farmers all over Africa have shown far more promising results sharing knowledge and working with scientists to establish low-input farming methods that leave the control of production in the hands of African farmers. We urge you to listen to the farmer movements from across the continent that have laid out their vision for a healthy, sustainable, and equitable food system.”

For further information and interviews:

[…] and now endorsed by 160 international organizations. AFSA presented its demands at a September 2 press conference and now issues a direct challenge to AGRA […] 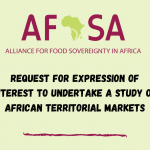 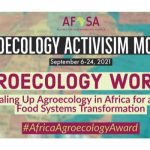