AFSA held a successful Annual General Meeting in Yaoundé, Cameroon, on December 1, 2022, where members discussed the organization’s annual narrative and financial reports and voted on new board members. This speech was given by the outgoing Board Chair, Dr.Chris Macoloo, who has served on the AFSA Board of Directors since 2019. We are sharing his valedictory speech, in which he objectively reviewed his tenure and highlighted key accomplishments and challenges that he hoped the new board of directors would expand and build on.

The Alliance for Food Sovereignty in Africa (AFSA) has had three Boards since its inauguration. The first Board of Directors under Bern Guri (COMPAS Africa) laid the foundation upon which future Boards had to build. In many respects, the first Board emphasized the cultural and spiritual aspects of African communities that should bind members of an emerging organization such as AFSA. Bern Guri has not been referred to as Chief for no reason! During this first regime, I remember the grueling exercise AFSA members undertook by crawling under some sacred rock on a hill around Techiman in northern Ghana while prohibited from uttering a single word for fear that the uttered word could be the password to instruct the rock to ‘lock its gates’, thereby cutting us from the free world. The second Board under the indefatigable Mariann Bassey Oruvwuje (Friends of the Earth Africa) introduced activism and advocacy hitherto unknown in the short history of AFSA. It was activism with a focus and purpose. I had never witnessed such an outpouring of energy in the Board of any organization! The third Board under Chris Macoloo (World Neighbors) was expected to benefit from the experiences of the two previous Boards.

Following our election in November 2019 in Addis Ababa, Ethiopia, on behalf of my colleagues in the team I made a Contract with AFSA members in my Acceptance Speech. First, I acknowledged our diversity in terms of geography, history, ethnicity, language, religion and gender. This diversity underscores our strength and I undertook to utilize its positive aspects in providing oversight to the management of AFSA. In the last three years, the inevitable teething problems arising from this diversity have evidently been subsiding. The Board has gallantly strived to maximize our positive commonalities and discourage and minimize the negative influences of our structural differences while steering and steadying the AFSA ship.

Second, I recognized that AFSA has two major categories of membership – the Core and Associate Members – as enshrined in the organization’s Constitution. Both categories of members contribute ideas equally towards helping AFSA achieve its mission and vision. The Associate Members are, however, constitutionally barred from participating in the electoral process. I hinted in my Acceptance Speech that in the future we may explore innovative ways of making the Associate Members to also contribute their capacities and abilities to the supervisory and oversight roles in the organization. I was categorical that should this innovation be found necessary, its implementation must be done within the Constitution of AFSA. Fidelity to our Constitution is of utmost importance in ensuring that AFSA continues to be managed professionally to continuously enjoy respect among peers on the continent and beyond. In this regard, the outgoing Board has made initial suggestions on how we may begin the process of addressing the issue. This issue is listed for substantive discussion during this General Assembly, and therefore will not detain us here.

Finally, I drew the attention of AFSA members to the fact that even as the organization expands in the size of its human resources and in the number and complexity of its programs, the role of the Board will and must remain that of providing oversight and not micro-management. The Board continued with the required professional ‘hands-off’ policy in its relationship with the Secretariat.

Immediately the third Board was elected into office, the world was hit by the COVID-19 pandemic. Furthermore, in the course of our tenure, AFSA was hit by tragedies of monumental magnitude. In addition to losing some of our dear colleagues, some AFSA members were also bereaved (the Chairman lost his mother and a younger brother, in addition to the bereavement of other colleagues). Despite these sustained drawbacks, the Board made significant progress and realized some achievements.

The highlights of the achievements (what we call our legacy) are herein-under presented.

I have subjectively observed above that the first Board was more spiritual and cultural in orientation while the second was more activist and advocacy-oriented. How would one characterize the third Board? Was it more intellectually engaging and enthusiastic about constructing/building systems and structures of the organization?  The jury is still out as we cannot judge ourselves objectively. It is the General Assembly to assess our approach to providing oversight to AFSA and drop us in the pigeonhole which they think is appropriate.

My message to the incoming Board, particularly to the individuals who will this afternoon vie for vacant positions is that these are voluntary positions that require commitment and creating time to serve the organization. It is not about power; it is not about uplifting your curriculum vitae (CV). It is about selfless service to our organization. The onus is on the electorate to ensure that we identify and elect the best from our midst to steer AFSA for the next three years. May I take this opportunity to wish members of the outgoing Board who are remaining and will be part of the new Board the best of luck in continuing to serve AFSA. And to the colleagues who are retiring with me today, all I can say is: We were elected, we served and we left with our heads high up; let us continue serving humanity to the best of our abilities!

My report would be incomplete without thanking my colleagues on the Board for the support and commitment that you accorded me during my leadership. The Secretariat under Million must also be commended for continuously striving to achieve the goal for which AFSA was formed. And of course you members for standing with us!

Thank You All and Long Live AFSA! 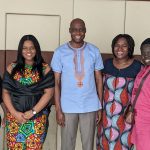 AFSA has elected a new Chairperson and appointed new members to its Board of Directors.News, Press Release 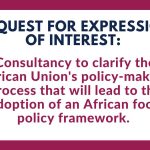 Request for Expression of Interest: Consultancy for the adoption of an African food policy frameworkNews