We, more than 400 people, in our capacity as members and supporters of the West African Peasants Seed Committee (WACS), represented by farmers (men, women and youth), farmers’ organisations, development NGOs, women’s groups, youth groups and research institutes from Benin, Burkina Faso, Chad, Côte d’Ivoire, Gambia, Ghana, Guinea, Guinea Bissau, Liberia, Mali, Mauritania, Niger, Senegal and Sierra Leone,  meeting from 15 to 17 March 2022 on the occasion of the 7th edition of the West African Peasants’ Seed Fair in Djimini, Senegal, have issued the attached Declaration in support of continental advocacy for a new paradigm on seed governance and policies.

In a context where rules and norms all over the world limit the food sovereignty of populations, the respect of the right to life and the right to food is consequently impinged upon by international cooperation. A decisive step has been taken by a damaging ecological transition characterised by the stranglehold of agribusiness on the food production chain. Incentives are being promoted for the approval of genetically modified plants and animals in agriculture: biotechnology is in our bowls. However, the genetic editing of seeds requires the use of related pesticides. A system is thus created for and by the agricultural industries in the vicious circle of the fusion of GMOs, pesticides and synthetic chemical fertilizers.

In the 21ste century, the all-chemical seed industry has led to the sterility of arable land, leaving farmers in a precarious situation. Added to this is the supply of new and expensive inputs for the production of seeds protected by intellectual property, which deprives farmers of their freedom as producers. However, with its back to the wall, the productivist logic of the use of synthetic fertilisers and GMOs has only led to soil exhaustion, coupled with a lack of diversity, disruption of ecosystems and loss of biodiversity.

In biology, nature rejects any chimerical construction that does not come from the engineering of its ecological universe. Farmers’ seed systems (FSS), however, embrace the mechanisms that underpin the balance of the ecosystem and preserve the unique renewable biomass that is agriculture and its virtues. More concerned with its financial health, the agricultural industry is annihilating the impact of the nutritional depletion of its genetic products on human health, which has never been so aggressively affected by the catastrophic development of chronic pathologies known as civilisation. In the light of the poisoning of the soil and of our organisms at the same time, we have no choice but to safeguard Natural Agriculture by refusing any food emptied of its nutrients.

Therefore, by virtue of the above :

We make the following recommendations to the sub-regional and African institutions (AU, ECOWAS, UEMOA and CILSS) 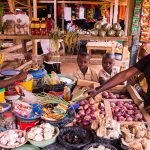 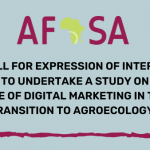