[Kampala, Uganda, April 20, 2021] – The Alliance for Food Sovereignty in Africa (AFSA) is pleased to officially launch a three-day social media campaign on Agroecology for a Just Food System and Climate Action in Africa, which will be held from April 20-22, 2021.   The campaign will join the global community in celebrating Mother Earth Day 2021 on Twitter, Facebook, and Instagram. The official hashtag for the campaign is #Agroecology4Climate and #RestoreOurEarth.

Solutions to the food and climate crisis have never been more urgent. Last year, countries in East and Central Africa were hit by the worst floods in decades, followed by the unprecedented desert locust outbreak devastating crops and pasture farmers depended on. Climate change-induced drought has pushed millions of people in the Sahel and South Africa into acute hunger. The COVID-19 pandemic added the last straw to the already deepening food and malnutrition crisis in Africa.

Ms. Ali Aii Shatu, AFSA’s Treasurer, said, “Africa needs a new vision and renewed commitment to address the climate and food crisis drastically. AFSA advocates championing Agroecology as the right paradigm to fundamentally transform Africa’s food systems to solve the climate, biodiversity, and food security crisis. It is high time for governments in Africa to resist and reject industrial agriculture and acknowledge agroecology as the sustainable farming system that empowers small-scale farmers for food security and a resilient future.”

AFSA is leading regional and national policy advocacy campaigns to uplift agroecology as an African solution to address the food and climate crisis. Our members from 12 African countries actively engage in policy advocacy dialogues to push governments to acknowledge and recognize agroecology in national and regional policy spaces and frameworks as a strategy for climate change adaptation and mitigation in Africa.

This year’s Earth Day social media campaign will feed into the grassroots movement for food sovereignty and agroecology in Africa. The goal is to promote agroecology as the most nature-friendly, ecologically sound, economically viable, and socially just solution to tackle the food and the climate crisis in Africa. It also intends to establish agroecology as the most urgent and critical policy priority for Africa for the upcoming COP-26.

Dr. Million Belay, the General Coordinator of AFSA said, “Food systems can be the driver and solution to the Climate Crisis. A fundamental transformation of our food systems tackles the climate crisis, uplifts millions out of poverty, feeds the hungry, improves health, addresses structural inequality, and restores biodiversity. The industrial food system is terminally sick to get us out of the mess they got us in. Only Agroecology backed by small-scale food producers can salvage the future of food and agriculture in Africa.”

The online campaign will join a Twitter storm on April 22, commemorating Mother Earth Day. It is a perfect day to pay tribute to all life forms on Earth, celebrate biocultural diversity and vow to protect and peacefully coexist with nature.

We cordially invite you to join our campaign on Twitter, Facebook and Instagram and champion agroecology as a solution to a healthy, just and resilient future!

AFSA is the biggest continental voice for food sovereignty and agroecology in Africa. It is the largest network of networks in Africa with more than 30 network members with a combined potential reach of up to 200 million Africans. Its membership embraces farmers, indigenous communities, pastoralists, hunters and gatherers, fisherfolk, consumer networks, women and youth networks, faith-based organizations and civil society organizations (CSOs). 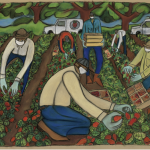